If there was ever a wine deemed to be called 'remarkable', it's this one!

Grown from 100% Verdicchio grapes in Casalfarneto's own vineyards in the centre of the Marche region in Italy, this is a wine of remarkable structure and elegance, soft, wrapping, extremely pleasant and with distinctive aromatic notes.

The most extraordinary feature of the wine is that the grapes are harvested in an advanced state of ripening (end of November, beginning of December) when, in favorable years, all the grapes have been wrapped in noble rot (botrytis cinerea). Like some of the other rare wines made in this way, like the famous Hungarian Tokay Azù, French Sélection de grains nobles or German Trockenbeerenauslese, these wines are highly structured, very soft and amiable. The main difference is that Cimacio is left to macerate until almost all of the sugars are gone, resulting in a relatively dry wine with a very high alcohol content of 14 - 14,5%.

The result is a wine with amazing golden color, exuding sweet scents of vanilla followed by mature notes of ripe pears, honey, almond, and spiced nuances, with white pepper and nutmeg. In the mouth, it emerges its full body structure with prevailing notes of dried fruits with raisins, apricots and black prunes. Mineral, slightly bitter, but rounded, soft, warm and savory – very persistent.

Cimaio is a wine that can be enjoyed on its own as a 'meditation' wine, but will also go well with very mature and dried cheeses like overaged Gouda, or with very savory and very pronounced dishes like foie gras or even a Thai chili dish.

In the Netherlands, Cimaio can be obtained via Vinissimo.
Posted by Bas Maertzdorf at 01:15 No comments:
Email ThisBlogThis!Share to TwitterShare to FacebookShare to Pinterest
Labels: Italian Wine, Verdicchio, White wine 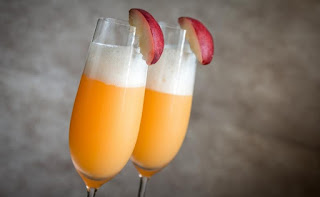 The Bellini cocktail, as served in the famous Harry's Bar in Venice. 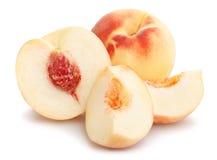 Posted by Bas Maertzdorf at 00:38 No comments:
Email ThisBlogThis!Share to TwitterShare to FacebookShare to Pinterest
Labels: Cocktail; Italian; Prosecco; Peach; 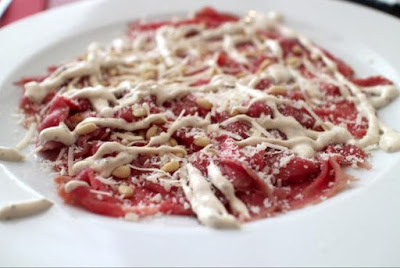 Nowadays, the Italian dish ‘Carpaccio’ has become so trendy that it’s found in almost as many variations as restaurants it's being served in. Based on the Piedmont speciality ‘carne cruda all'albese’ -basically the Northern Italian version of steak tartare- this dish was originally made from very thinly sliced beef, a mayonnaise-based sauce, pine nuts, and parmesan cheese.

That’s it - So there was no arugula, no capers, no olives, no croutons, no pesto, no mushrooms, no basil, no olive oil, no balsamic vinegar and most certainly no tomatoes!

Inventive cooks, however, will always find ways to build on a good idea and soon variations with the aforementioned ingredients and other meats such as veal and venison and also fish like salmon and tuna appeared. Even our vegetarian friends (bless them) came up with their own -very tasteful- variations of carpaccio with raw vegetables--thinly sliced eggplant, squash, carrot, zucchini, and mushrooms.

However, instead of letting one’s imagination run wild, it sometimes can be even more fun to go back to the source; to learn about the true essence of a dish in its original form. We at DiscoverGreatTaste plead guilty as charged to such endeavors. Luckily, one has not to wander far to find the origin of Carpaccio, as we not only know the original recipe, we know the inventor, and even the place. 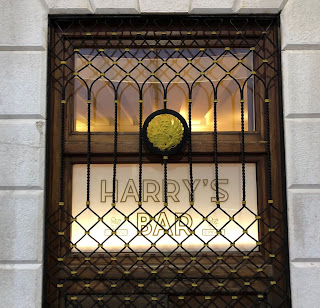 Having achieved some notoriety after being immortalized in Hemingway’s novel “Across the River and Into the Trees”,  Harry's Bar in Venice is widely recognized as the birthplace of this dish. Arrigo (Harry) Cipriani, son of the late Giuseppe Cipriani and current proprietor, remembers how his father invented the dish in 1950. Giuseppe told of one of his customers, the Contessa Amalia Nani Moceniego, as being bored and rich and a finicky eater. “She could eat only a few things, among them raw meat, and she was sick and tired of tartare.“ So Guiseppe came up with this dish that soon became famous in Italy and named it Carppacio, for the renaissance-era painter whose work was being exhibited in Venice at the time. According to legend, the dish was inspired by the vibrant red and white that the painter used.

Be that as it may, Giuseppe had a nick for naming his dishes after famous artists: another of his well-known inventions, a delightful summer cocktail made from pureed peaches and sparkling prosecco wine was named after the painter Bellini, who in real life was tied to Carpaccio as well. 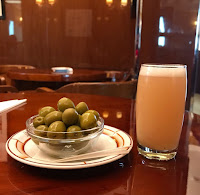 At Harry's bar, the cocktail is commonly served as an aperitif with some olives, but even more surprisingly still, the dish and the cocktail make a great combination. And it’s still being served by Harry and his descendants at this Venetian landmark, but also at Venetian landmark prices. So our advice would be to search for a quiet little taverna in the back streets of Venice, or better still: prepare the dish and the cocktail yourself!

The dish itself is remarkably simple, but there are a few important rules we have to consider if we want to stick to the original. Firstly, the preferred piece of beef is the top sirloin, as it has more flavor than the tenderloin. But tenderloin will most certainly do fine also as it is much easier to handle. Secondly, the beef should never be frozen. Many restaurants do this to make it easier to slice the beef very thinly, thus getting many portions out of a single tenderloin. But the slices in the original dish aren't that thin at all. Using a sharp knife with a long blade, cut slices by hand as thin as you can and put them between two pieces of clean-film. Then, gently press with the palm of your hand or use a rolling pin until you have nice thin slices without breaking them. Arrange on a cold plate that has been lightly brushed with extra virgin olive oil.  And lastly: never cut the meat more than 2 hours before you plan to serve.

Alternatively, you can use the ready-made vacuum packaged sliced carpaccio you find in your local supermarket. But then again, we can no longer be friends ;-)

After having arranged the meat on the place, drizzle over the sauce in a cross-hatch pattern and finish with some thin slices of parmesan cheese. Most of all, your dish should show the vivid contrast between the red of the meat and the white of the sauce - why else name it after our beloved painter?

For the sauce use:

If no-one is looking we add some arugula, roasted pine-nuts and capers to the dish,
as we feel it definitely adds to the overall flavor and texture.
But please - keep that as a secret between us. Enjoy! 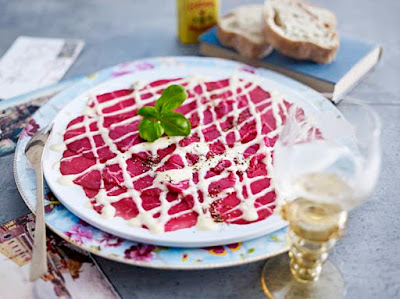 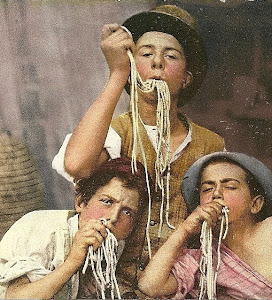